skip to main | skip to sidebar

Thank You, May I Have Another

Today I had an appointment with the OB who delivered our twins (as well as removed a humungo fibroid first so that Cheryl could carry those twins). His focus is generally fertility but we trust him and he’s a crack surgeon. He’s conducted over 600 procedures since our last visit.

After much discussion and an in depth exam, we decided on a hysterectomy in November. The Zoladex may shrink the fibroid up to 20% but once I go off the shots, it will likely grow larger than it was originally. And if I just have the fibroid removed, my uterus will grow more to replace it! According to the doctor, if you do not want to have babies, there is no reason to hold onto your uterus. And I feel the fibroid's presence now, every moment. The doctor said at this size it's like being 3 months pregnant. My friends are probably tired of me making pee stops every time we go out. So any hesitance I should have at this point would be more about the surgery itself and recovery.

Not so with the ovaries. Gotta keep them. I don’t really want these bruises once a month for the next five years, but looks like I have no choice. 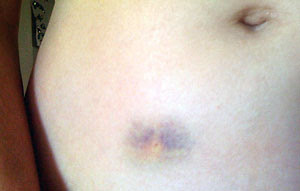 The OB said we really shouldn’t remove my ovaries unless I have the gene that indicated risk. I don’t. And I need them even after menopause, to keep my bones strong, my heart healthy, my libido cooking and my emotions stable.

In some ways, this next surgery is the least of my worries. The doctor said that after my next shot my hormones will have hit rock bottom and that some women hate it so much they don’t want to keep it up. He’s a real ray of sunshine that guy, but he’s honest and I like to know worst case scenarios.

Today I feel pretty good, bones a little achy, but I'm happy to be alive. What a year this has turned out to be. So many famous people leaving this world that the snarkier blogs are calling it The Summer of Death. The healthcare debate is the latest subject to reinforce this country’s divides. Young soldiers are still giving their lives every week in a far away country.

We’re all tested along the way. My first was being gay. Can’t say I rode that one out of the gate very smoothly. When Cheryl came along, I showed marginal improvements. By the time we had kids, I was reasonably equipped to be a normal human being. And now cancer has awarded a badge of authority I probably don’t deserve. I have received so many cards and well-wishes from people I had no idea even thought about me anymore. It’s really amazing. I hate to admit it, but I may have finally grown up.

I now believe that a life fully lived is our shot at triumph over tragedy. No matter what portion has been taken from you, you must not hide. You must go out and live it.
Posted by C.M. Harris at 10:53 AM

Absolutely the most important lesson of life. Yep, you've grown up. But let me let you in on a little secret. ::whispers:: That does not mean the inner child went anywhere. Anytime you need that child, just holler. Can't be grown up all the time;-)

You've said that a lot over the years--that you hadn't grown up yet. I've never seen you that way. I've always admired your wisdom, your self-motivation and your sense of humor. You've always been very grown up to me. Funny. It must be that you're SO MUCH OLDER than I am!!! ;-)

Michelle, your last paragraph is exactly how I feel about life, as John Irving said, "keep passing the open windows". Life gives us lots of reasons to "jump" and give up, etc. But the victory over life's tragedies is to keep passing those windows, those opportunities to bail out on a relationship, a job, or life itself. I have come to the same conclusion!

Good point, Jessie. I forgot all about the inner child reserves. :D

Jo, I seem so mature to you because I was practically your boss at Scales.

I love that book, Ann. He is such an awesome writer. Good to know we're on the same page. It is MUCH appreciated. And Becca has been a huge support!

"I now believe that a life fully lived is our shot at triumph over tragedy. No matter what portion has been taken from you, you must not hide. You must go out and live it."

That, my good, friend, will be often quoted. Thanks.